Mike is also active in the NFPA code writing process as a technical committee member. He believes sharing updates to NFPA 101, and NFPA 99 at PDC and ASHE annual is very important. Educating the users and the enforcers on Code updates and intention behind the Code develops a common understanding.

ASHE Advocacy is making a major impact on harmonizing NFPA 101 and the International Building Code (IBC). Mike believes there are too many Code and interpretations, highlighting a need for Common requirements. Mike’s focus will be on the education and understanding the impact of the Codes on the day-to-day operations in healthcare facilities.

Fire Protection and Life Safety are important to the operations and accreditation of facilities. Mike’s presence on the Board of Directors will bring his experience in the Code writing process, Life Safety expertise, and a focus on sharing the knowledge, to the ASHE membership.

VOTE for ASHE Board of Directors

I just returned from the American Society for Healthcare Engineering (ASHE) annual conference, this year held in San Antoinio, TX. Great city and a great conference. I always enjoy attending an ASHE annual conference as they are very educational and informative. I always make new friends and have the opportunity to re-establish old acquaintances.

This year, some of the sessions that I attended were:

Maintaining Physical Features of Life Safety, which was taught by Frank Van Overmeiren of FPC Consultants. He covered one of the most common finding by a Joint Commission surveyor, which is a problem with the documentation of testing or inspecting a fire safety system. He identifies documentation problems to include incorrect procedures (such as not properly documenting a main drain test) or non-action, where a contractor failed to perform a test.

ICC Quest for a Unified Code, by Chad Beebe, the ASHE Director of Advocacy. A task force set up between ASHE and the International Code Council (ICC) is attempting to draw the IBC building code and the IFC fire code closer into alignment with the NFPA 101 Life Safety Code. Chad reports that they got about 60% of their proposals accepted by the ICC committee which will be presented to the main ICC council for approval in September in Portland, OR. The main disappointment was a proposal to recognize acoustical tile and grid ceiling system as resisting the passage of smoke, which the NFPA codes do. This proposal was defeated at the committee level and still has a chance at the annual meeting in September, but needs a significant majority of the voters to approve it. By not recognizing acoustical tile and grid ceiling system as resisting the passage of smoke, the IBC and the IFC would expect 1-hour fire rated walls in corridors even in fully sprinklered buildings.

NFPA 110 Changes, by David Stymiest of Smith, Seckman and Reid. Some of the biggest changes coming when the 2012 edition of the LSC is finally adopted are: 1). Defined testing requirements after repairs are made to the generators; 2). All test records must be permanently maintained; 3). Parallel gear must be maintained similarly as ATS are maintained; 4). Battery maintenance allows for conductance testing in lieu of specific gravity testing; 5). Generator must warm up to operating temperature before the clocks starts for the 3o minute monthly test; 6). If you are performing the annual load test because you cannot meet the 30% load test each month, then the annual test is reduced to 90 minutes from 2 hours; 7). Even though Joint Commission has been requiring a 3-year 4-hour load test, the 1999 edition of NFPA 110 did not require it, but the new 2010 edition will now be requiring it as well; 8). Minimum generator room temperature is reduced from 70 degrees F to 40 degrees F; and 9). The new edition will permit the storage of parts and tools that support the generator to be stored in the generator room.

My wife joined me in San Antonio and we enjoyed the River Walk every evening. It truly is a marvel how the city has developed this really unique series of canals and river with restaurants and shops all along the way. 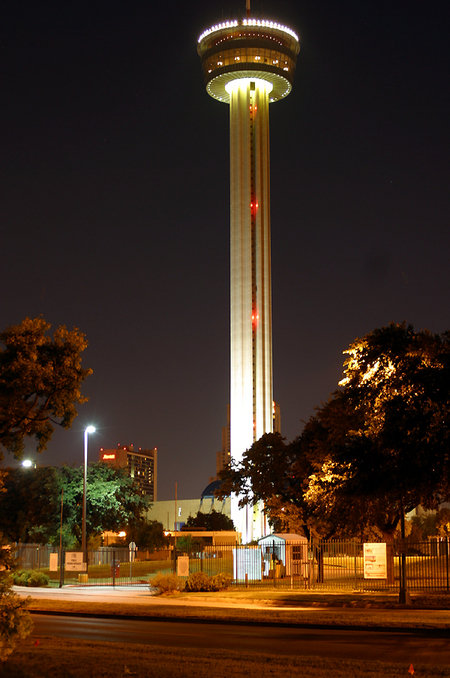 We also enjoyed the Tower of Americas, which has a revolving restaurant at the top. This tower was constructed for the 1968 Worlds Fair held in San Antonio. This tower is taller than the Seattle’s Space Needle which was built for the 1973 Worlds Fair.

Compliance One Group provides sustainable solutions for your healthcare facility in the following areas: